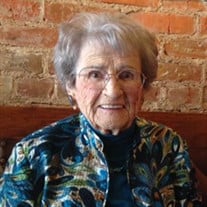 Marjorie “Teeny” Finch Snelling Keeling gently passed away at her home on Thursday night May 24, 2018 amid the loving company of her family. As one of nine children, Teeny was born in Boydton, Virginia on December 5, 1920 to Arthur Browne Snelling and Sarah Gladys Reekes Snelling. Arthur was the pharmacist in Boydton and Gladys was the daughter of Judge Charles Thomas Reekes of that same town. Teeny graduated from Boydton High School in June 1938. She attended Oklahoma City University in the 1939/40 school year where she join the oldest and largest sorority on campus: Phi Delta. The following 1940/41 school year she attended Madison College, now James Madison University. She served a summer internship between her junior and senior year at the University of Virginia. She graduated from Madison College in June 1943 followed by a fifth year internship at Texas State Women’s College in Denton, Texas. That internship qualified her for membership as a certified dietician in the American Dietetic Association. While in Denton, Teeny married Mr. W. Byron Keeling on January 31, 1944. They were married in the First Presbyterian Church in Dallas, Texas. Shortly thereafter Byron received his military orders to go overseas to serve in WWII. Upon his return the couple moved to Meherrin, Virginia where they had four children together. In 1954 the family moved to Byron’s home town of Keysville, Virginia. From 1961 through June 1969 Teeny taught eighth and ninth grade science at Randolph Henry High School in Charlotte Court House, Virginia. She was the chairman of the science department where she championed the modernization of the department by redesigning and updating the chemistry lab. In September 1969, she began teaching the same subject at Prince Edward Academy in Farmville, Virginia. She retired in June of 1973. In March of 1980 she came out of retirement to work part-time as a dietician for the Women, Infants, and Children Program (W.I.C) until 1998. After leaving the W.I.C program Teeny enjoyed taking short excursions with her children, sewing, being with her grandchildren and sitting on her lovely screened-in back porch enjoying her beverage of choice. Teeny is survived by her four children: Charles B. Keeling and his wife Cawanua Keeling, Marjorie Murphy and her husband Bob Murphy, Jane K. Hensley and her husband John Hensley, and Ann T. Keeling. Also surviving are four grandchildren: Brandon A. Joyce, Tyree O. Joyce, Carrie Hensley Jones, and Logan Hensley. She leaves behind her constant companion--a finicky, oversized yellow cat. A memorial service celebrating her life will take place on June 30, 2018 at 3:00 pm at Ash Camp Baptist Church in Keysville Virginia. The family requests that in lieu of flowers, memorial donations may be made to the Charlotte County Rescue Squad, P.O. Box 330, Keysville, Virginia 23947.

Marjorie &#8220;Teeny&#8221; Finch Snelling Keeling gently passed away at her home on Thursday night May 24, 2018 amid the loving company of her family. As one of nine children, Teeny was born in Boydton, Virginia on December 5, 1920 to Arthur... View Obituary & Service Information

The family of Marjorie Finch Snelling Keeling created this Life Tributes page to make it easy to share your memories.

Send flowers to the Keeling family.