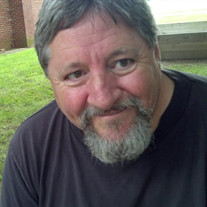 Roxboro, NC - Jerry’s engines roared to life 7-27-1961 and he crossed the finish line 12-3-2019 after an 11-year battle with cancer. Jerry loved the outdoors and enjoyed hunting, going to the race, shooting, coaching Special Olympics Bocce Ball, fishing from the beach, the pier or his boat the “Miss Hope”. Even mowing the grass brought him joy as long as he was outdoors. Cape Hattaras held a special place in his heart. He also loved his FedEx route driving the big rig. Jerry never gave up, never complained and never asked ‘why me’. Even after being confined to a wheelchair and being in constant pain he lived life well, to the fullest and best of his ability with grace and dignity. He went above and beyond in his journey…”Bravo Zulu”. Jerry enjoyed times of fellowship and always had time for someone in need. Jerry’s laugh was infectious, and he was always ready with a smile. Jerry’s positive outlook, ability to find the humor in any given situation, his strength, tenacity and steadfast, unwavering faith in God have been an inspiration to all who knew him. In addition to that, his unconditional love and devotion to his wife, children and other family members is his legacy. There is no doubt that God welcomed him saying, “Well done my good and faithful servant.” Cherishing his memory are his wife of 21 years, Angela Oakley Barbar; daughters, Regina Hope “Hopie” Barbar and Nicole “Nikki” Barbar Wilson (Devin); grandchildren, Hayden Wilson and Devin Wilson, Jr.; sister, Michelle Barbar (Mary Laraz); brother, Stephen Barbar (Melissa); sister-in-law, Tiara Timmerman (David); brother-in-law, Kevin “Pete” Oakley (Tina) and nieces/nephews, Laura Carlin, Ty Oakley, Lewis Winstead IV, Colin Barbar, Quentin Barbar, Dara Timmerman, Carlton Timmerman and Darmon Timmerman. He was preceded in death by his parents, Ralph Michael and Regina Chapman Barbar, sister and brother-in-law, Lisa and Michael Barnett and son, Christopher Brent Phillips. A Celebration of Life for Jerry will be held at 4 PM on Saturday, December 14, 2019, at Westwood Baptist Church, 970 Leesburg Road, Roxboro, NC. Pastor Gerald Hodges and Associate Pastor Johnathon Taylor will officiate the service. Arrangements are by Cremation Society of Virginia – Southside, Inc. and respects can be made at cremationofvirginia.com.

The family of Jerry Francis Barbar created this Life Tributes page to make it easy to share your memories.

Send flowers to the Barbar family.