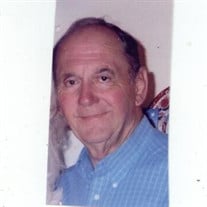 Jerry Lee Arnold, 75, of Java, VA, passed away Saturday, May 2, 2015. He was born July 6, 1939 in Huntington, Indiana, to the late Jacob Arnold and Mary E. Daughtery Arnold. Jerry was a retired plant manager for Wabash Magnetics and was... View Obituary & Service Information

The family of Jerry Lee Arnold created this Life Tributes page to make it easy to share your memories.

Send flowers to the Arnold family.