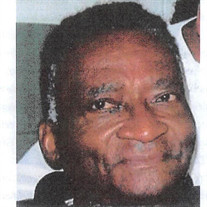 South Boston, VA Henry Lee Ferrell, Jr. departed this life on Saturday, December 5, 2020, at Mulberry Creek Nursing and Rehab Center in Martinsville, Virginia. He was born in Halifax County, Virginia on March 14, 1943 to the late Henry Lee Ferrell, Sr. and Annie Frances Hogue Ferrell. He joined New Arbor Baptist Church at an early age. He attended Mary Bethune High School where he graduated in 1962. He went on to attend a vocational school, where he majored in plumbing. He worked at Commodore Homes of Virginia in Danville, VA for 15 years where he retired from. He loved working on the farm and watching all types of sports. He could often be spotted in the crowd at Comets basketball and football games. He leaves to cherish his memory: his devoted stepmother, Bessie Ferrell; 1 sister Frances Louise Rufus; 4 brothers, Harvey Ferrell (Sally), Tommie Ferrell (Elenore), James Ferrell (Gertrude), and Benjamin Ferrell (Carolyn) all of South Boston, Virginia. He also leaves to cherish his memory a devoted friend, Margaret White and a host of nieces, nephews, cousins and friends. He was preceded in death by his father, Henry Lee Ferrell, Sr., his mother, Annie Frances Hogue Ferrell and two brothers, Harry B. Ferrell and Eugene Ferrell. WE can rejoice in knowing that our angel is now peacefully resting "In God's Care."

The family of Mr. Henry Lee Ferrell Jr. created this Life Tributes page to make it easy to share your memories.

Send flowers to the Ferrell family.