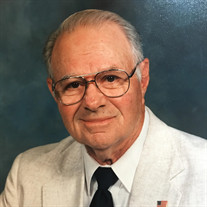 Bracey, VA - Donald Eugene Woodlief (86) departed this life on Sunday, April 23, 2017 at his home surrounded by his family. Don was preceded in death by his parents, Ted and Aileen Woodlief. He is survived by his loving wife of 48 years, Betty Roberts Woodlief. Don was a loving father to five children; Donna Woodlief, Dale (Traci) Woodlief, Dean Woodlief, Daryn (Sherry) Woodlief, and Daryl (Carrie) Woodlief. He is also survived by eight grandchildren; Aaron Zevgolis, Heather Wells, Shelly Rouse, Keleigh Blevins, Courtney Woodlief, Jennefer Woodlief, Carter Tuck, Addi Woodlief and eight great-grandchildren. Don is also survived by his brother Ray (Eleanor) Woodlief, and many nieces and nephews. Don graduated from Hopewell High School and continued his education at Wake Forest College after signing a contract with the New York Yankees. While at Wake Forest, he was a pitcher for the Deacons baseball team and was a member of the Pan American team that won the silver medal in the 1952 Olympics. One of his biggest feats was striking out 18 UNC batters in one game. During college summer breaks, Don played Semi-Pro Baseball in Nova Scotia. As a member of the 1951 Stellarton Albions team, he was inducted into the Nova Scotia Baseball Hall of Fame in 1982. In 1955, Don was drafted in the army for a two-year commitment. Due to an injury, Don retired from his baseball career and moved back to Hopewell, VA. After retiring from Philip Morris, Don moved to Bracey, VA. There he played golf and won many club championships at Tanglewood Shores Golf and Country Club, as well as South Hill Country Club. He was an active member of Olive Branch Baptist Church. The family will have visitation Friday, April 28th at Olive Branch Baptist Church at 11:00am located at 5223 Blackridge Road. A Memorial Service will follow at 12:00pm. In lieu of flowers, please make a donation to the Olive Branch Building Fund. Arrangements are by Cremation Society of Virginia – Southside, Inc.

Bracey, VA - Donald Eugene Woodlief (86) departed this life on Sunday, April 23, 2017 at his home surrounded by his family. Don was preceded in death by his parents, Ted and Aileen Woodlief. He is survived by his loving wife of 48 years,... View Obituary & Service Information

The family of Donald Eugene Woodlief created this Life Tributes page to make it easy to share your memories.

Send flowers to the Woodlief family.