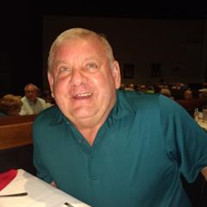 Benjamin Buster Cifers, husband to Joyce Blackwell Cifers, went to be with the Lord on Tuesday, January 12, 2021 at the age of 71 while holding the hand of his beloved one last time. Ben was born on February 22, 1949 in Granville County to the late Richard Harvey Cifers and Inez Woodlief Cifers. He was the youngest of four, preceded in death by his three older sisters: Nell Ramsey, Dorothy Elliott, and Francis Callis. Ben graduated from J.F. Webb High School in 1967. After high school, he attained an associates degree in computer programming from W.W. Holding Technical, currently named Wake Tech. After graduating from college in 1969, Ben joined the National Guard, transferring to the Army Reserve a few years later. He spent many years working in the construction industry as a welder and pipe-fitter building nursing homes and power plants. He loved to build, but his health forced him to change careers and after 18 years of service, he retired from Fluor Global, the site maintenance contractor at IBM in RTP. In retirement, Ben rediscovered his love of the land and the flavor of vine-ripened tomatoes and opened a plant nursery on the family farm. Ben's love for growing, building, and creating things was only eclipsed by his love for his family, who were able to be with him during his last moments. Ben is survived by his wife and two sons. His wife, Joyce, still resides on Ben's family farm in Granville County. His oldest son, Devin Cifers, lives in Morrisville, NC, while his youngest, Shawn Cifers, lives in Saxapahaw, NC with his wife, Stephanie Fay Cifers, and daughter, Ivy Mae Cifers. He was a long-time member of Tungsten Baptist Church where he loved to minister through song to the congregation. A memorial service will be held at 2 PM on Saturday, January 23, 2021 at his farm at 2566 Dalton Mill Rd, Bullock, NC 27507. The Reverends Sam Brewer and Norman Talley will officiate the service. In lieu of flowers, donations are requested to be given to your favorite charitable organization. Watkins Cooper Lyon is assisting the family.

Benjamin Buster Cifers, husband to Joyce Blackwell Cifers, went to be with the Lord on Tuesday, January 12, 2021 at the age of 71 while holding the hand of his beloved one last time. Ben was born on February 22, 1949 in Granville County to... View Obituary & Service Information

The family of Benjamin Buster Cifers created this Life Tributes page to make it easy to share your memories.

Send flowers to the Cifers family.